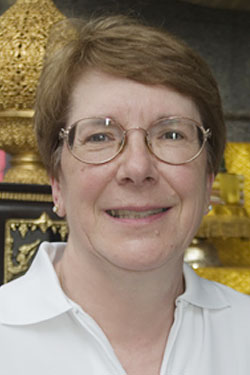 Katie Thorpe started playing bridge while studying at McMaster University, and was introduced to duplicate bridge in 1970.

In North American competition she won the 1991 Mixed Board-A-Match Teams and was second in the 2001 Wagar Women Knockout Teams.

The following deal was the last board in the 2015 CSTC final. At the time Thorpe’s team was trailing by 11 IMPs. Not only did her team win the championship as a result of her partnership’s efforts on this deal, but it also earned Katie and her partner, Marty Kirr, the 2015 International Bridge Press Association (IBPA) “Yeh Brothers Best Bid Deal of the Year” award.

Kirr reasoned that Thorpe’s 3♠ bid, offering him to play 3NT from his side, must contain the king-queen of the suit, otherwise with only one stopper in the suit she would have bid 3NT herself after he’d shown heart values. When Thorpe showed the queen of diamonds, Kirr visualized that any possible losing heart (if Thorpe was 4-2-3-4 instead of 4-1-3-5) can be discarded on the fourth diamond, while a spade ruff in Kirr’s hand would provide the thirteenth trick. He thus offered seven clubs as a contract expecting that Thorpe would convert to seven diamonds if she held four diamonds.

When the opponents at the other table stopped in 6NT Thorpe’s team gained 12 IMPs to win the match by only 1 IMP in a dramatic fashion.