By Keith Balcombe Whitby ON

In the spring of 2020, the Canadian Bridge Federation (CBF) decided to change its Face-to-Face 2020 Canadian Championships scheduled for May 2020 in Niagara Falls to an online competition. That BBO championship resulted in the largest ever number of teams ever (70), even though the CBF could not run any of the Flight B or C teams. There were four categories: Open, Women, Senior and Mixed teams. The online CBC began on BBO in early June and was a marathon until October.

Some interesting tidbits from these championships

Here is the key hand in the aforementioned CSTC Final: 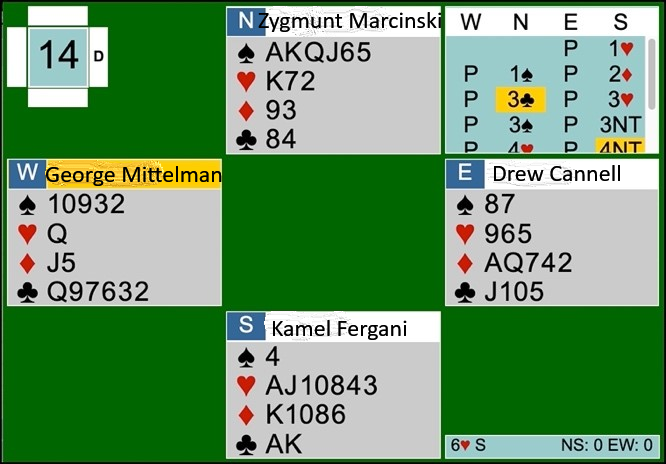 Fergani and Marcinski bid the good slam, but Baran and Daigneault only made a mild slam try. BARAN’S 5 IMP lead became FERGANI’S 6 IMP lead, the final margin.  The Bridge Night in Canada broadcast included an interview the winners – just like on its hockey namesake. Kamel Fergani stated something like “I drove to slam because I thought our opponents would bid it”. Such was the margin of victory.

The CBF created the Canbri awards. The “volunteer” selection panel determined from the player submissions the best played hand, best defended hand and best bid hand during the online 2020 CBC.

The selection panel was: Francine Asselin Cimon (Montréal QC), Aidan Ballantine (Vancouver BC) and yours truly.

We hope and expect that there will be 2021 Canbri awards.

Bridge Night in Canada Twitch broadcasts are expected to continue. Information will be posted on the site when matches are scheduled.