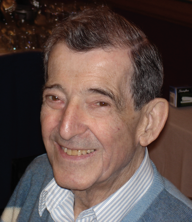 Ralph Cohen was one of Sam Gold’s protégés in his early days of bridge in Montréal. He partnered Gold in the 1964 Olympiad – Sami Kehela says, “Gold and Cohen played at least as well as did Murray and Kehela.” Cohen also won two Inter-City Challenges for Montréal (1967 and 1968) playing with Gold.

He was already one of Canada’s top players when the opportunity arose to make bridge his career, with the ACBL. When the ACBL moved its headquarters from Greenwich, CT to Memphis, TN in 1971, Cohen moved with them, where he lived until he died in 2006, serving the ACBL in various capacities.

He succeeded Goldberg in 1984 and the position was renamed Executive Director. Cohen held that position for 2½ years until 1986, when he was named consultant to the league, a position he held until his retirement in 1991. During his stint in Memphis, Cohen was also a member of the ACBL Laws Commission, eventually becoming Co-Chairman. From 1996, Cohen was also Vice-Chairman of the World Bridge Federation’s Laws Committee. Cohen was awarded the Sidney H. Lazard Jr. Sportsmanship Award in 2006.

On the occasion of his winning the Sportsmanship Award, former ACBL President Joan Gerard told a story about Cohen when he was in Memphis and in charge of the Grand National Teams. She was her district’s GNT Coordinator and called Cohen to ask his advice about a request from a player to be added to a GNT squad even though he had not played in qualifying rounds because of illness. “Do what you want,” Cohen told Gerard, “but consider what you will say when another player wants in despite not playing because of a sick pet or a hurt child.” That wisdom, Gerard said, served her well from that point on.

As a player, in addition to placing fourth in the 1964 Olympiad for Canada, Cohen represented the USA on numerous occasions in world championships. He came fifth in the 1990 Rosenblum, fourth in the 1994 Senior Teams and fifth in the 2005 Transnational Teams. He won four North American bridge titles: the Lebhar IMP Pairs (1990), the Jacoby Open Swiss Teams (1995, 1998) and the Baze Senior Knockout Teams (1997). He also served as Non-Playing Captain of the Canadian (2001) Venice Cup team.

Jordan Cohen, one of three sons of Ralph and Joan Cohen, said his father loved bridge and believes that his father’s love of bridge kept him going through a long battle with cancer. Only three days before his death, Ralph made his way to the bridge club in Memphis, where Jordan and his brother, Billy, were playing. During the game, Ralph took a fall and, unbeknownst to anyone at the time, suffered a broken shoulder and hip. Despite the injuries, he finished the game and came in first. “He went out a winner,” said Jordan.