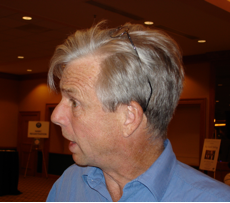 As the names of Romulus and Remus, Heloise and Abelard and Lewis and Clark are forever linked in history, the names of “Mark and Boris” are forever entwined in Canadian bridge. Although many of their successes came as partners, they were both successful with others as well.

Playing together Mark Molson and Boris Baran won Silver medals in the 1995 Bermuda Bowl and the 1992 Pan-American games, and a Bronze medal in the 1990 Rosenblum (in one of the most notorious incidents in World Bridge Federation history having been denied a place in the final by a scoring error, the correction of which was disallowed upon appeal).

Molson died in 2006 of complications during heart surgery following a massive heart attack while playing the other game he loved, golf.

During their run at the 1995 Bermuda Bowl, Molson and Baran became known affectionately by their teammates as “the thugs”, so-called for their style of bludgeoning the opposition into submission. The following deal, from their quarterfinal match against South Africa, illustrates that style: 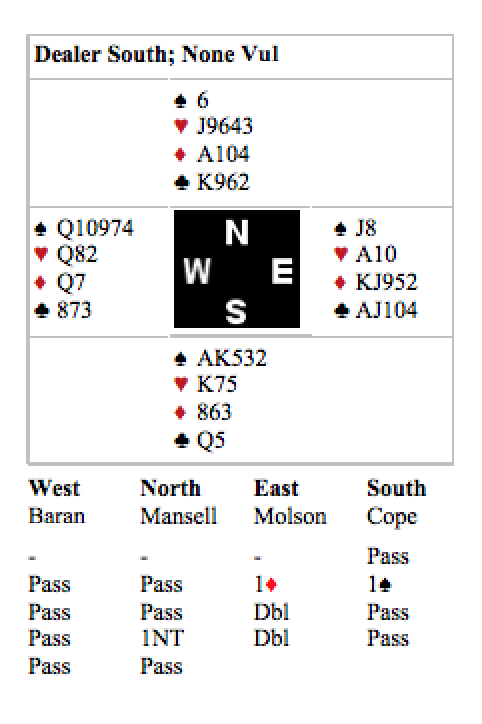 That was a lot of bidding for two balanced hands with half the high cards! At the other table, Gitelman and Mittelman (“The Men”) had declared 2NT untroubled and had gone one off on a diamond lead, for minus 50. Here, with more to go on, Molson started the ♠J, won in dummy. Cope had no convenient entry to hand to lead a heart up, so started with the ♥K. Molson won the ace and continued spades.

Cope won that and played a second heart, achieving the unluckiest of results, low from Baran. After much consideration, declarer went with the odds and inserted the ♥9.

Molson won the ten and shifted to the ♣J, won by the queen in dummy. A third heart, won by the queen, let Baran cash three spades and lead a club through the king for plus 500 and 12 IMPs to Canada.

The correct heart guess would have meant minus 180 and 6 IMPs to South Africa.