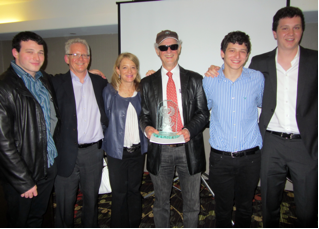 Joey Silver, (in shades) with his family at the 2013 Hall of Fame Ceremony

Silver is a lawyer from Montreal who adds colour and interest whenever and wherever he sits down to play.

He was a member of the 1995 Bermuda Bowl silver medal team which is the best result a Canadian team has ever achieved in this most prestigious of all world events. He also won the silver medal at the 2016 World Senior Pairs.

His other notable wins are the Epson Teams, the 1985 Cavendish Invitational Pairs, the Hong Kong Inter-City, and the 2002 IOC Grand Prix.

Silver and his partner Irving Litvack were awarded the 1986 John Simon Sportsman of the Year Award.