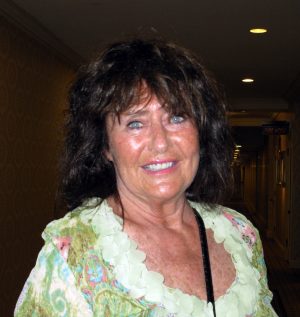 Diana Gordon is Canada’s only World Grand Master. For over 30 years she was the premier female player in Canada. Between 1976 and 2011 Gordon represented Canada in seven Olympiad Women’s Teams as well as eight Venice Cups.

Between 1980 and 2005 Gordon won a record 15 Canadian Women’s Team Championships.

Here is Diana at the top of her game in Rhodes, at the 1996 Olympiad in a match against India.

Playing ace from ace-king with an even number of cards in the suit, Gordon led the ♥A, receiving an upside-down count signal of the eight from Reus showing an odd number.

Trick two was a problem. It looked like the defence needed three tricks in the minor suits to beat the contract. That would require Reus to hold one of the ♦K, the ♦Q or the ♣K.

Gordon solved the problem neatly by leading a low club at trick two – Reus gave her the three, showing an even number, which needed to be four for the defence to have a chance. Declarer won the ♣K, drew trumps and led her second club. Diana won the ♣A and exited with the ♥K. Declarer could ruff the ♥K but had to lose two diamonds for one off. The game was made at most tables in both the Open and Women’s events. 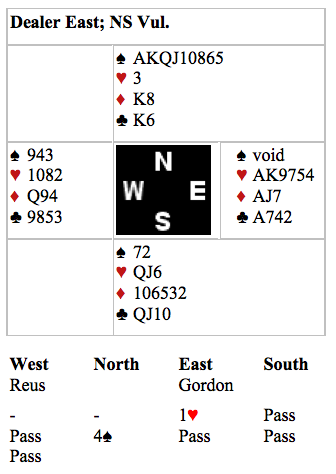