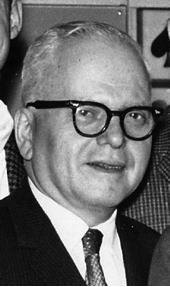 Sam Gold of Montréal (1908 – 1982) was “Mr. Bridge” to generations of Québecois. He was a superb player and became the second Canadian player to achieve the status of Life Master in 1948 (ACBL Life Master #132).

Gold represented Canada in the 1964 World Team Olympiad (with Cohen, Murray, Kehela, Forbes, Howell, and NPC Al Lando), where Canada came fourth, losing in the semi-finals to the USA, and was twice a member of Montréal’s Intercity Team which won the Congress Trophy in 1967 and 1968.

In addition to being a top player and mentor to many of Canada’s top players, Sam Gold was also a top tournament director and bridge administrator.

As an administrator he was a member of the National Laws Commission and a charter member of the Montréal Bridge League where he was instrumental in affiliating the MBL with the ACBL in 1946. As a director Gold contributed many new duplicate movements, including the Three-Quarter Howell.

Sam Gold was also a talented writer on bridge, contributing articles to, among others, The Bridge World.