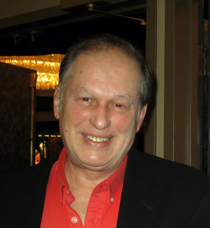 George Mittelman was born in Europe of Hungarian parents. He won two World Championships; the 1982 Mixed Pairs and the 2002 Senior Teams. He also won a Silver medal in the 1995 Bermuda Bowl, as well as two Bronze medals in the Rosenblum Cup (1982 and 1990).

In the 1990 Rosenblum Cup, in the now-infamous Geneva Incident, the team was robbed of the chance to play for gold by a scoring error, the correction of which was disallowed upon appeal.

Here is Mittelman in action at a local Toronto tournament, playing with John Gowdy: 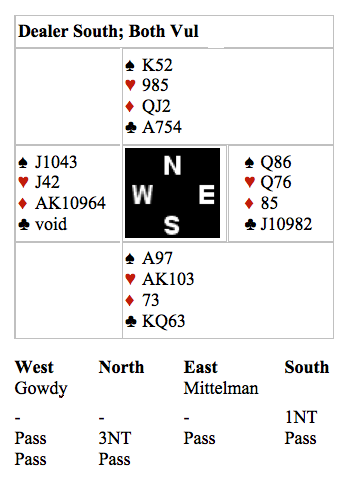 Not willing to surrender an undeserved diamond trick to declarer with possible bad breaks about, Gowdy led the ♦A, and continued with the ♦K and another upon seeing the dummy. In a flash, Mittelman discarded the ♥Q! Declarer could no longer make the hand.

Note that if Mittelman had retained the ♥Q, declarer could have employed an avoidance play, leading hearts twice from the dummy toward his hand. If Mittelman played the queen on either of those leads, he’d be allowed to hold it; if not, the third round of hearts would force him to win the queen. In either case, the long heart would provide declarer’s ninth trick.