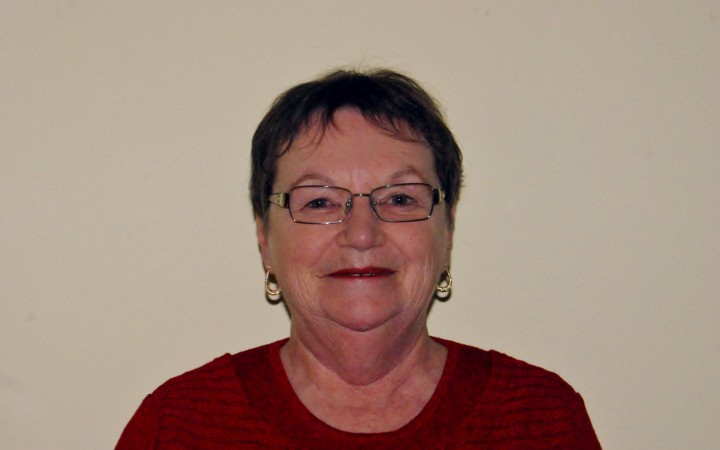 Since 1976, Francine Cimon represented Canada in seven consecutive Olympiads (1976-2000) and ten Venice Cups. She earned four World Championship medals; silver in the 2000 Olympiad Women’s Teams, and three bronze; 1989 Venice Cup, as well as 1988 and 1996 Olympiad Women’s Teams. She competed in her first World Bridge Olympiad in 1976 at the age of twenty-five finishing fourth.

Here is a hand showing Francine in action at the 2012 Canadian Women Team Championship. 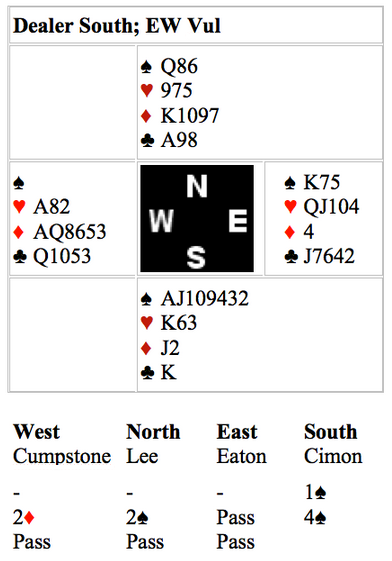 As South, Cimon received the lead of the 5♣. With the vulnerable overcall on her left, Francine was reasonably certain of the favourable position of the ♦AQ, and that she could establish a 2nd diamond trick to discard one of her hearts. If the spade finesse works and spades split 2-1, she can re-enter dummy with the ♠8 to enjoy the established diamond. Accordingly, she won the lead with dummy’s ♣A to take the spade finesse. East covered the ♠Q with the ♠K and West discarded the ♦3.

The 3-0 spade break meant that the contract could no longer be legitimately made since West must have 6 diamonds and the ♥A for her vulnerable overcall. If declarer led a diamond before drawing the last trump, West can give her partner a ruff and the defense can take three more heart tricks, while if declarer drew three rounds of trumps first West can hold up her ♦A for one round thus preventing declarer from enjoying a 2nd diamond trick.

Cimon believed that it is important to put the opponents to the test early in the hand and before they can exchange useful information. Knowing that her opponents play upside-down count signals she played the♦2 at trick three to make it impossible for West to determine if East has a singleton or a doubleton (when East follows with the♦x she may have ♦Jx or the singleton ♦x, but if Francine had played the ♦J instead of the ♦2 West would have known that East’s ♦x is a singleton since with ♦x2 East would have followed with the ♦2).

West now faced a difficult problem since if declarer held ♠AJ9xxxx it is important for West to win the ¨A to prevent declarer from reaching dummy and picking up partner’s ♠10x. In that case if declarer held no more diamonds she has no entry to the dummy and if declarer held the ♦J she still cannot reach dummy since partner will ruff the 2nd round of diamonds. Accordingly, West elected to go up with the ♦A. and continued with a club.

The contract was now impossible to defeat. Cimon ruffed the club and played a spade to the 8 in the dummy. She ruffed a club in her hand and played all her spades. West discarded 2 diamonds, one club and finally a heart leaving the following 4-card ending: 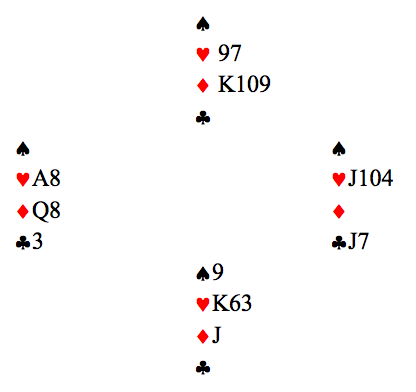 Cimon now played the ♦J to the ♦K and followed with the ♦10 to West’s ♦Q discarding a heart. West was now end played and had to give Cimon her 10th trick with the ♥K.

It is worth noting that had West kept a club before declarer played her last spade, the 5-card ending would have been as follows: 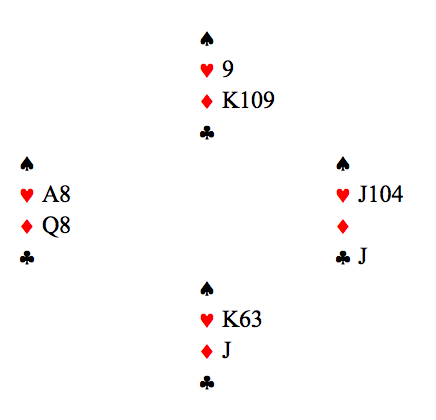 Declarer would now run her ♦J, and exits with a small heart. She ruffs the club return and plays another heart end playing West in diamonds. This deal allowed Cimon to win 11 Imps for her team when the contract was defeated two tricks at the other table.