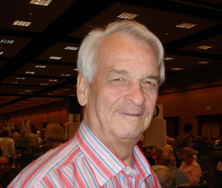 Doug Drew and Canadian bridge administration were synonymous for 40 years, and he was one of the six founding members of the Canadian Bridge Federation.

From 1957 until 1997 Drew continuously held elected office serving on the Ontario Unit Board. He provided guiding influence and served as Unit and District President during many of those years.

He served as the District 2 representative on the ACBL Board of Directors from 1969 to 1993 (with the exception of a three-year hiatus), and was elected ACBL President in 1984 and Chairman of the Board of Governors in 1985. During that period

Drew was the driving force behind the creation of two all-Canadian ACBL districts (1 & 2) and created the ACBL Educational Program.

Drew has always taken an eager interest in Canadian international affairs and the World Bridge Federation. As a representative of WBF Zone II (North America) he served on the WBF Executive Council, the Appeals Committee, the Corporate Development Committee, the Finance Committee, and the Master Points Committee.

Drew’s superb organizational and problem-solving abilities were evidenced in the many tournaments he chaired and co-chaired over the years, including the Toronto Canadian Nationals Regional, the Niagara Falls Regional, and the 1997 World Junior Bridge Team Championships in Hamilton, Ontario.

While Drew’s accomplishments as a bridge administrator overshadowed his success as a player, he has won numerous titles. He also created his own bidding system, “Five-Card Minors”, intended to be a fun-to-play method for the amusement of its devotees and opponents alike. The key to the system is that playing five-card minors dictates that you open three-card majors.