Though he may be the least-known member of the CBF Hall of Fame, William Anderson belongs with the most-influential figures in the game, alongside Work, Culbertson and Goren.

It is no exaggeration to say that Anderson has influenced every single bridge player in the world. He did this through his development of the distributional point count for Charles Goren.

In the mid-Forties, Goren came to Anderson, a long-time friend and brilliant mathematician, and asked him to undertake the mathematical research needed to prove whether a hand’s trick-taking potential could be totally evaluated for suit bidding as well as no-trump bidding, on a point-count basis.

The problem with the 4-3-2-1 Milton Work point count was that it was fine for no-trump bidding with balanced hands, but was notoriously-inaccurate for suit evaluation. At the time, nearly all players still used the Culbertson honour-trick method of evaluating their hands for suit bidding.

Anderson spent two years working on the problem. His first task was to verify whether the Work point count method was accurate – he discovered that, although it could be bettered slightly mathematically, the combination of its simplicity and accuracy could not be improved upon. He then set about resolving Goren’s main issue – how to evaluate hands for suit bidding. Anderson thus developed the 3-2-1 point scheme for evaluating hands with voids, singletons and doubletons respectively.

Just as Milton Work popularized the 4-3-2-1 count developed by Bryant McCampbell, Charles Goren popularized Anderson’s 3-2-1 count. Goren’s “Point Count Bidding in Contract Bridge” (Simon & Shuster, 1949) was a runaway bestseller, eventually selling more than three million copies. There were 12 re-printings in its first five years and it was translated into many languages.

In the introduction of the book, Goren paid homage to Anderson:

“It required a great deal of study and experimentation. But, with the assistance of William M. Anderson of Toronto, head of one of Canada’s foremost life insurance companies and an actuary of great renown, I was able to develop a scale of values which will work effectively in an overwhelming majority of hands.”

“It is appropriate to make acknowledgement, here, to all those who have contributed both directly and indirectly to this effort…Above all, to William M. Anderson, who not only is the last word where mathematical problems are concerned, but whose broad understanding of the fundamental theories of the game I was able to put to very practical use.”

On Saturday, August 22, 1981, in “Goren on Bridge,” his newspaper column, Goren discussed the development of point-count bidding as follows:

“…I took my problem to a friend of mine who was an actuary – Bill Anderson of Toronto. It was he who devised the distributional point-count that, in conjunction with the Milton Work count, is still the basis of what most people teach and play today…the only thing I am sorry about in the whole matter is that the great amount of work put into point-count bidding by Bill Anderson, and the accuracy and simplicity of his concepts, has not been fully recognized.”

Bill Anderson was an acknowledged genius: he graduated from the University of Toronto with honours in mathematics and physics, joined the North American Life Assurance Company upon graduation and soon became the youngest-ever actuary in Canada. He rose to president, then chairman, of North American Life and became president of both the Canadian Institute of Actuaries and the U.S.-based Society of Actuaries. He was awarded a fellowship in the Faculty of Actuaries of Scotland in 1944, only 14 of which had been awarded since the Faculty’s inception more than 100 years before. Anderson was responsible for developing and introducing the Code of Professional Conduct for actuaries, putting the profession on the same footing as the medical and legal professions.

Oswald Jacoby, at the time he did so the youngest-ever American to become an actuary, once declared about Bill Anderson: “I used to claim I was the best actuary among bridge players but quickly abandoned that claim after meeting Bill Anderson, after which I claimed only to be the best bridge player among actuaries.”

Anderson was a successful player, Life Master No. 357, partnering his wife Marjorie most of the time and winning a North American Bridge Championship (NABC) with her. Here is Anderson in action on a deal reported in Charlie Goren’s bridge column.

“The 4-3-2-1 point count was introduced by Bryant McCampbell in 1915 and publicized by Milton Work in his many writings. However, it was used almost only for no-trump bidding. It was not until a Toronto actuary, William Anderson, developed the distributional count in the 40’s that point count swept the bridge world.Besides his fascination with the mathematical aspects of bridge, Anderson was an accomplished player. He held the West cards on today’s hand…Anderson led the ♠Q, won in the dummy. Declarer led a club with the view to obtaining ruffs in the dummy, and ducked it to Anderson’s ten. Anderson found the only continuation to sink the contract, the ♦K. Declarer won the ace, but now a club ruff would bring Anderson’s trump jack back into play and no club ruff would result in two more club losers.” 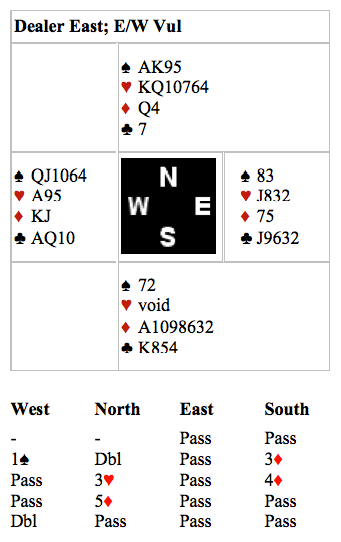